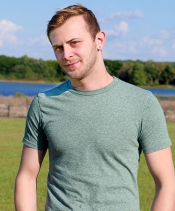 "I am just an easy going guy that gets along well with everyone."

"We are happy to have Chandler join our team. We just can't get enough of his hairy chest and handsomely rugged looks."