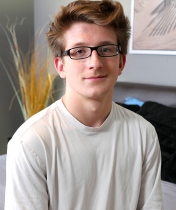 "I am grabbing life by the balls. I am who I want to be and I will become whatever I want to be. I won't let anything get in the way. "

"Oliver is only 18 but he has a good head on his shoulders. Lucky for us, he needs to make money for college so we get to see this high sex driven young man in action. "