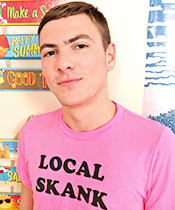 "I'm a nudist with an exhibitionist streak in me. I'm proud of my body and feel most comfortable in the nude. You're only young once so I'm livin' my best life!"

"Johnny loves to help us in the kitchen. He's actually a master baker. No seriously, he's in school for pastry chef and he's sweet as pecan pie!"